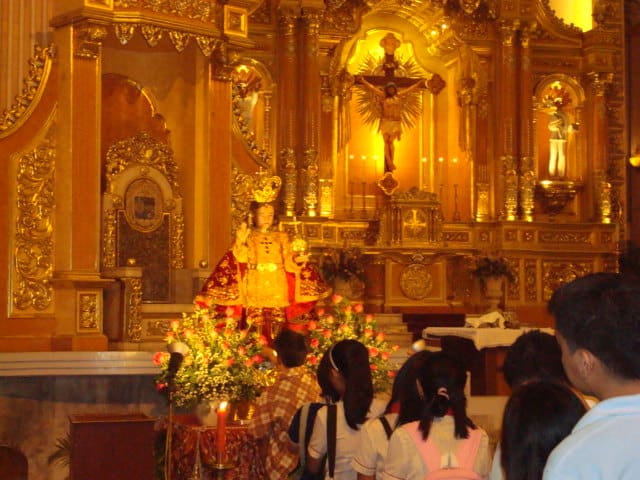 (By Louie Nacorda, Commissioner of the Cultural and Historical Affairs Commission (CHAC) of Cebu City,
and a member of Parish Pastoral Council of the Cebu Metropolitan Cathedral Parish)

My first encounter with the Santo Niño (Holy Child) came via his widely venerated image in what was then known as the Church of St. Agustin (now the Basilica  Minore del Santo Niño de Cebu) in downtown Cebu, where my first school, the Colegio del Santo Niño is located. We, grade school students, would have a regular 4:00pm Friday visit to the church for benediction of the Blessed Sacrament, followed by the veneration of his then blackened image in the camarin or budoir at the back of the main altar.

I remember a chubby faced small image of a smiling child with curly hair, blackened by paint, dressed in royal finery wearing an imperial crown on its head,  and looking graciously upon the devotees, smelling of sweet perfume. That imagery would later become more vivid as the Philippines celebrated its Fourth Centennial of Christianization in 1965, with the image of the Santo Niño Jesus de Cebu as the focal point. The image was stripped clean of its black paint, and the original pinkish complexion was exposed, typical of Flanders’ iconography of the Holy Child of the 14th-15th century (refer to the extant image of the Holy Child of Meclin, Belgium)

This was also the same time that the image was canonically crowned, by order of Pope Paul VI. Plaster of Paris images in various sizes, framed photographs, and posters of the Santo Niño was made available throughout the country. This was also the period when I first became truly enamoured of the Child Jesus through his venerable image in Cebu.

Many years would pass before I started acquiring different images of the Holy Child, not just of the Cebu version, but of different representations as he is venerated in different parts of the Philippines. My first acquisition was a peculiar image modelled after the Santo Niño de Cebu. Peculiar because it blesses with its left hand, while the right carries an orb, whereas the usual iconography has the right hand raised in blessing, while the left carries an orb, representing the globe. “A collector’s item”, the seller told me. Indeed it is, for until today, 40 years after, I still haven’t seen a similarly carved image.

That image of the Holy Child of the Other Abled, as I would call my first acquisition, led to the continuous arrival of other Santo Niño images in my list. I have an image of the Holy Child of Jesus Tondo in Manila; of Pandacan; of Prague in San Beda; of Malolos in Bulacan; of Macati; and many other interpretations. As of my last count, I now have about 40 images in different sizes, representations and materials, and about 15 oil paintings of the same subject in various titles like de Atocha; de Salud; de los Chinos; El Capitan General, etc.

But aside from being a collector of Santo Niño images, I am first and foremost a devotee of the Divine Childhood of Our Lord Jesus Christ, and my collection of different images and portraits is but one of the many expressions of this devotion.

At the core of every Catholic devotion, is the imitation of the virtues of the saint venerated. In my case, it is not a saint I am most devoted to, but Our Lord in his childhood, because I want to emulate and imitate his virtues of humility, obedience, compassion, mercy and most of all, his faith, his hope and his unending love for all creatures. As he himself said, “Unless you turn from your sins and become like little children, you will never get into the Kingdom of Heaven”(Mt 18:3)

What is Pit Senyor?