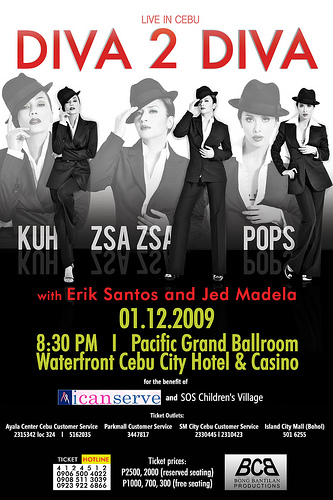 3 divas in a pre-Sinulog concert

Filling up a plush hotel ballroom with 4,000 Cebuanos on a Monday three days before payday and six days before the Sinulog hit proved to be a challenging task. But a PR campaign helped organizers of the Cebu Diva2Diva concert who began selling tickets during that long 2008 Christmas vacation.

Both Christmas Day and New Year’s Day fell on a Thursday. Considering that the Philippines celebrated Jose Rizal Day – to commemorate the death of the national hero – on December 30, 2008, the whole country experienced the longest Christmas holiday in years. Filipinos came back for work only on January 5, 2009.

The concert was set on December 12, 2009 – the Monday right before Cebu’s grand Santo Niño feast and Sinulog festival the next weekend. Competing for attention was another concert at the same venue on a Friday featuring a comedienne Pokwang of a popular television noontime show that appealed to a wider audience.

Cebu socialites, business executives, top government officials who stayed in Cebu during the long Christmas vacation were excited to learn about the show. Three Philippine divas – Kuh Ledesma, Pops Fernandez, Zsa-Zsa Padilla along with popular male singers Erik Santos and Jed Madela – would perform in a pre-Sinulog concert at the Grand Pacific Ballroom of the Cebu City Waterfront Hotel and Casino on January 12, 2009.

However, tickets in public outlets in Cebu City’s top malls – Ayala Commercial Center and SM City – were not selling fast as expected during the long vacation. Many prominent Cebuanos were out of town while others complained that a Monday several days before payday was not a good day for the difficult Cebuano market. The middle class, meanwhile, preferred to buy tickets for the Pokwang show.

Most of the Diva2Diva tickets pegged at P2,500 and P2,000. The initial feedback from ticket outlets was negative. Cebuanos are accustomed to less expensive concerts in the past. Moreover, the neophyte producer refused to invest in full-page newspaper ads. He, instead, focused on posters placed in malls, call center officers, restaurants, and Cebu nightlife hangouts.

With only eight days to sell tickets starting on the day people begin going back for work, PRWorks Inc. was presented with a dilemma. Would it push for a slashing of the ticket prices to respond to the feedback received from ticket outlets? Or would it persevere in the set pricing scheme but focus on specific niches to fill up the rest of the plush Waterfront ballroom?

After assessing the situation, PRWorks Inc. decided to push through with the pricing scheme.

The agency’s public relations campaign reached out to a non-traditional concert market. According to Doris Mongaya of PRWorks Inc., “We set out to reach those with money to spend and don’t rely on paychecks. However, unlike the party crowd, they have yet not decided what entertainment fare they intend to enjoy during the pre-Sinulog days.”

To achieve this, the agency pushed for the putting up of a big billboard befitting a grand pre-Sinulog extravaganza at the busy Gen. Maxilom Avenue. Then, instructions were issued to place the remaining posters at luxury dining destinations around Metro Cebu.

This was followed by press releases positioning the concert as the grandest pre-Sinulog event with a special focus on the Cebuano glitterati falling over each other seeking choice front seats. The subliminal message sent was: “This is THE pre-Sinulog concert. One has to be there or you’re not ‘in.’”

A month earlier, on December 8, 2009, PRWORKS Inc. conducted a press conference at the plush Chinese cuisine destination The Ching Palace. This press conference featured phone patch interviews with the divas. Excited, the local entertainment media featured the Diva2Diva concert prominently the week prior.

These moves worked like magic on the target audience. Ticket sales grew exponentially especially the premium P2,500 tickets as well as the lower end P300, P700, and P1,000 tickets.

Known socialites who came home from their extended vacations outside Cebu started calling the different ticket outlets reserving what choice seats were left.

The high society crowd appeared in their party’s best quite early for their reserved seats. The hundreds who came to buy at the last minute had to settle for the remaining seats worth P2,000. The other categories were already sold out.

True to their reputation as Philippine divas, Kuh Ledesma, Pops Fernandez, and Sza-Sza Padilla wowed Cebu’s high society crowd – which is admittedly a difficult audience to please – with a grand three-hour extravaganza that set the tone for the week’s Sinulog festivities.

Ticket sales are up for ‘showdown’ of divas