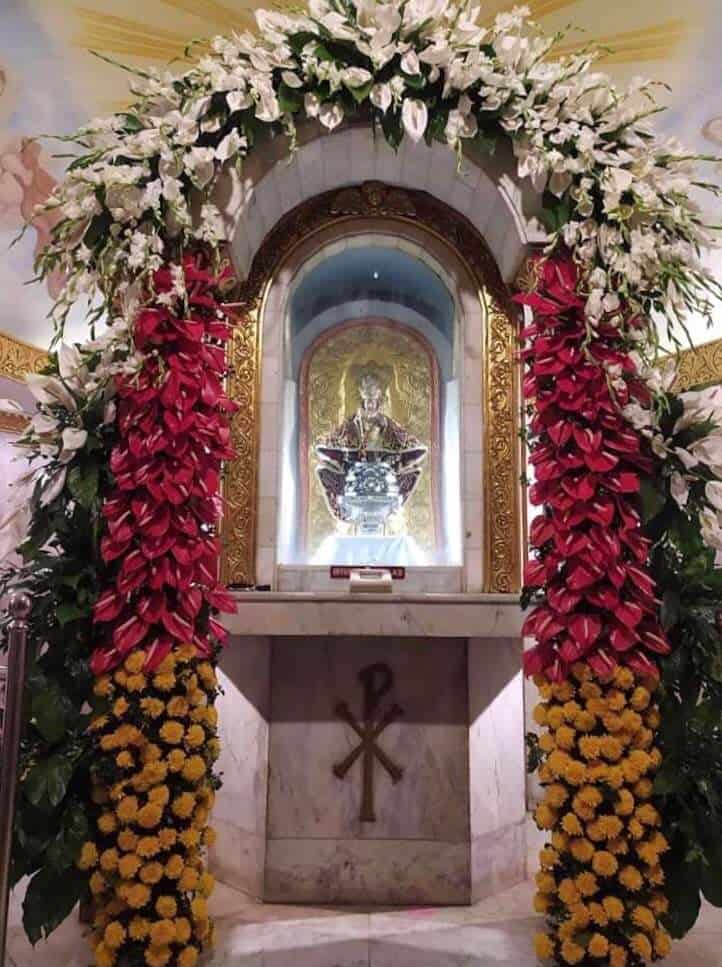 Decorating the Senyor’s altar
in the midst of the pandemic

Covid-19 has disrupted even the annual feast of Senyor Sto. Niño. The organizers of the 2021 Sinulog festival in Cebu City canceled the event’s physical and online activities. But, the pandemic failed to deter PRWorks from fulfilling its Sinulog vow of arranging flowers for the Senyor inside His chapel.

The decision to cancel Sinulog activities stemmed from the Regional Inter-Agency Task Force (RIATF) for the Management of Emerging Infectious Diseases that recommended to the national IATF the move.

The RIATF said all performance-based Sinulog Festival activities had to be canceled because these pose a threat to the performers’ and event-goers’ health and safety. The difficulty to manage the crowd also led the Augustinian fathers to cancel physical attendance at the fiesta novenas and masses. The religious activities are now virtual.

Nonetheless, the following is the narrative of the PRWorks Sinulog vow of arranging flowers as posted in 2012.

This was the second day of the nine-day novena before the celebration of the feast of Senyor Sto. Niño (The Holy Child Jesus) and the Sinulog Festival on January 15, 2012.

“Viva Pit Senyor!”  The assembly loudly chanted as the mass ended and the swarm of church-goers headed towards the exit.

After almost an hour, the church seemed completely empty except for the staff of PRworks Inc. Observing the sanctity of the place, the group silently proceeded to the chapel housing the image of Sr. Sto. Niño, the Patron of Cebu.

An evening with the Senyor

No, the PRWorks team went there not for public relations but to arrange a fresh floral decoration, a panata or panaad (vow) for several years now. It was a privilege of an exclusive evening with the image of the Holy Child inside His chapel that Friday night.

Before they had the chapel all to themselves, however, they have to wait a while longer.

The PRWorks team, upon arriving at the side door of the chapel, found themselves talking in almost to a whisper because there was still a devotee inside, praying fervently on bended knees. The man, who had his surgical mask pulled down below his jaw, appeared to be crying while mouthing his supplications. Praying for some kind of a miracle? Maybe, but only God knows what the man was praying for.

When the man left, the PRWorks team had the chapel all to themselves. Along with some volunteers, they first removed the old flower decors in hush-hush tones. As the work progressed, the hush-hush atmosphere gradually dissipated and the chapel soon became resonant of activity.

PRWorks and the volunteers were deadly serious and focused on their work as they are determined to get the job done as early as possible.

However, as time flew by, the activity surprisingly became enjoyable and fun with the arrival of the professional florists tapped to do the decorating. Tedious, though, the work was, it never affected the group as they exchanged jokes and funny stories while fashioning out the floral designs.

While everybody was busy, a PRWorks staffer took time out to have a glimpse of the Sto. Niño whom he claimed was wearing a grin at that very moment. So, he decided to get his mobile and took some snapshots of the “grinning” Holy Child.

Alas, all the shots he had taken came out blurry. To test his mobile’s camera, he took a shot of his fellow PRWorker and it came out very good. So, he took some snapshots again of the Sto. Niño, this time from different angles, but lo and behold, the pictures still came out blurry.

He gave up, thinking maybe the Holy Child didn’t want His picture taken, especially with a hint of a grin on His face.

PRWorks has been sponsoring the Sinulog floral decorations for the Sto. Niño every 5th and 6th day of the novena for 18 years now. The team brought peace lilies, anthuriums, and golden yellows.

But they experienced something different this 2021. Because of the virtual novena and masses, the basilica turned out to be practically deserted. More significant, they decorated an altar displaying the original image, a privilege that seldom happens.